Getting to experience the creativity of Chef Nakanoue Hiroki at Michelin-rated Sushiyoshi was the culinary highlight of my recent Japan trip. Although Osaka has a booming street food scene, its sushi has generally played second fiddle to Tokyo’s. Sushiyoshi is trying to break that narrative with its creative omakase. I had heard great things about this 26-year-old sushi-ya and was excited to try it. As an added bonus, Chef Hiroki speaks decent English and his exuberant personality makes the experience memorable for all guests. How did this chef’s tasting stack up to all the other omakase?

When I arrived at 7pm for my reservation, there was already a full house as the sushi-ya contains only 8 seats at the counter. I was escorted to my spot at the end of the bar and was promptly served tea and a hot towel. Japanese omakase can be intimidating for non-Japanese tourists; however, Chef Hiroki was very welcoming. My omakase started with salmon and caviar tartar housed in an “apple” wafer vessel. The wafer reminded me of a candy that I ate as a child. My curiosity peaked as I was served a bowl of cherry tomatoes. I thought it was going to be some fancy tomato concoction…but it was really just delicious tomatoes. This was likely intended as a palate cleanser much to my embarrassment. 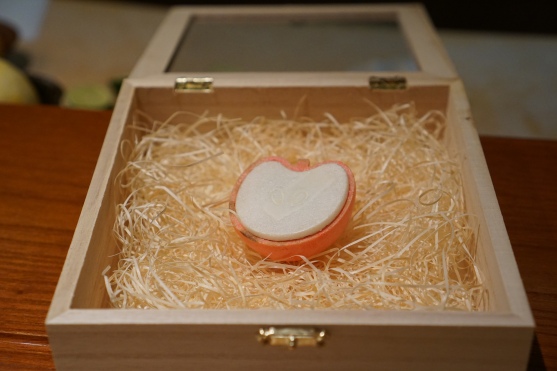 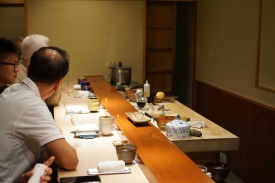 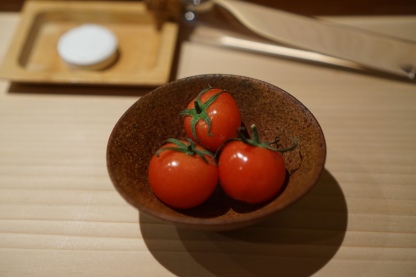 The second course was sama sashimi that was beautifully wrapped in a shiso leaf. The third course was sama-pressed sushi, Japanese pike fish with sugar sprinkled on top. There was a hint of smoke, which contrasted the crunchy sweetness of the sugar. Osaka is known for pressed sushi and this was an interesting take on the traditional nigiri that I’m used to. The fourth course was mashed shrimp with its brains served alongside a plate of rock salt. I was instructed to squeeze some fancy lime onto the salt plate and then dip the shrimp paste on it. The citrusy salty mixture elevated the delicate sweet shrimp. At this point, I got the hint that I was in for a different “omakase” than what I had expected. It is much less about the nigiri and more about Chef Hiroki’s interpretation of the “sushi” chef tasting.

The fifth course was a traditional Japanese grouper nigiri, which was delightful. However, it was not as spectacular as the previous courses in terms of creativity. I was also served pickled cucumber as a palate cleanser instead of the typical ginger and it was very refreshing. The sixth course was raw oyster from Brittany served with tuna and caviar from a fish that the Chef Hiroki caught in Bordeaux. It was a burst of ocean flavor and easily one of my favorite of the night. The story of how he caught the fish added to the enjoyment. The seventh course was cod sperm sac and lime. Funny enough, Chef Hiroki was a bit shy and amused while explaining cod sperm to me. I assumed he expected me to be nervous about it, but I’m an adventurous eater so that did not phase me at all.  The lime was also a variety that I have not seen before; it was crunchier and longer in length than the US version. The eighth course was cod sperm hand roll, which looked like an intestine from a small animal. Surprisingly, it was creamy and soft, almost like cream cheese, and luckily not fishy at all.

raw oyster from Brittany served with tuna and caviar 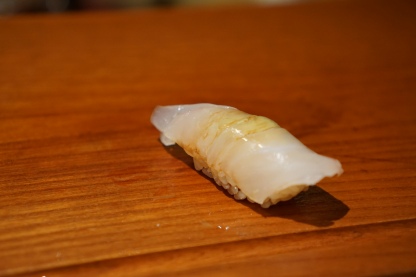 The ninth course was baby sardines served on a spoon with a quail egg yolk. The creamy egg yolk ameliorated the salty sardines making it a delicious combination. The tenth course was a more traditional chu toro nigiri, a reminder that Chef Hiroki can do traditional sushi with the best of them.  The eleventh course was salmon roe, ikura, made from Hokkaido salmon. The preparation process was entertainment in itself as he made the ikura in front of us. Chef Hiroki informed us that salmon from Hokkaido had doubled in price due to the low inventory, which I mused that we were adding to the situation by eating salmon eggs. Normally salmon roe is marinated in a combination of soy and other ingredients. This rendition of ikura was prepared fresh from the sac at the bar with just a little drizzle of soy and a sprinkle of yuzu zest resulting in the exceedingly fresh salty eggs. Another entertaining tidbit was seeing Chef Hiroki’s assistant painstakingly roasting each seaweed over a small charcoal grill, one by one. That is commitment to freshness.

baby sardines served on a spoon with a quail egg yolk 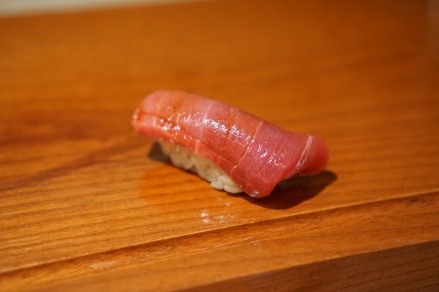 The twelfth course was a highlight of the dining experience due to how much fun and interactive it was. We were given marshmallows on a long skewers and were guided to go outside the restaurant. Waiting for us was Chef Hiroki with a bucket of coal and straw roasting bonito while sitting on the street in front of his restaurant. That is not something you see every day. As guests all crowded around the fire while ignoring curious passersby and roasting their marshmallows, we all had animated short moments with the chef. As I was trying to capture the experience on my camera, Chef Hiroki asked for my cell and proceeded to take a selfie of us. That was very spontaneous and a great memento for me. After what seemed like 15 minutes, we moved back inside and savored the street-side grilled bonito. The smoky flavor from the hay added depth to an otherwise delicate fish and the accompanying wasabi mousse. At this point, I was very full and satisfied. However, Chef Hiroki was not finished as we had four courses left to go…to my horror. 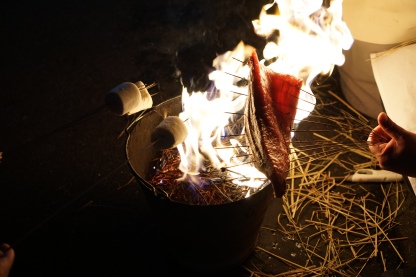 The thirteenth course was grilled sea eel, simple and elegant. Luckily it was a small portion as I was hitting my limit. The fourteenth course was soup made from bonito and seaweed broth with maitake mushrooms and a splash of lime. It was minimalist and complex at the same time. I happily slurped this up thinking dessert was next. To my astonished delight, Chef Hiroki made a sea urchin and caviar pot just for me as he knew it was my absolute favorite thing to eat. All the other diners looked on with a mixture of jealousy and amusement as I devoured the Hokkaido uni. The “fifteenth” course was Courbet apple, a variety native to Japan. Chef Hiroki checked each apple under the light to ensure that it had maximum “honey” center, a juicy part that surprisingly tasted like honey. Additionally, the apple had a crunchy texture similar to an Asian pear. The last course of the night was a coriander sorbet with mango mousse and olive oil, a satisfying end to my 16th (officially) or 17th (with the extra uni pot) course omakase.

soup made from bonito and seaweed broth with maitake mushrooms 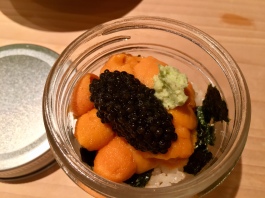 Chef Hiroki made the omakase experience very memorable with his mad hatter’s energy and with his culinary alchemy. There is only one seating per night for eight seats at $250 a person. This is an experience that is worth the price tag in a sea of other great restaurants in Osaka. 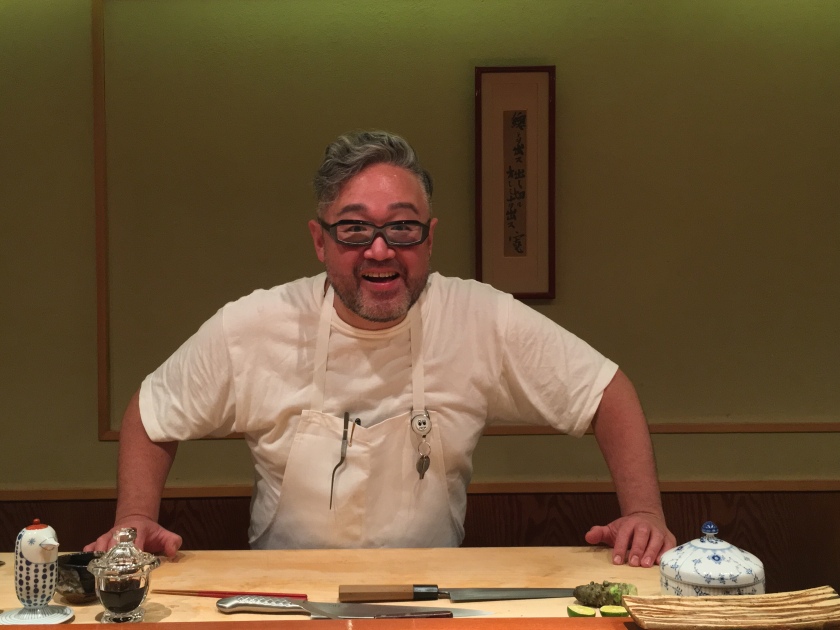 Click here for our 3 “Days” of Gluttony in Osaka, Japan.

Click here for our 2 Day Temple Stay in Koyasan, Japan.

For related articles, visit the TRAVEL page or the World Travel Index.