Tim Ho Wan (“THW”) is a Hong Kong dim sum destination that was awarded a Michelin star in 2010 for its Mongkok (HK) location and aptly named the “cheapest Michelin star restaurant in the world”. Earlier this year, THW opened its first US location in Manhattan East Village to a lot of buzz and corresponding crazy lines. One Sunday, my group of six ventured to this NY location to see what the hype was all about. My first impression of dim sum at THW was that it was a tamer and more Americanized experience. The restaurant has only 60 seats in a small space so dim sum carts are not a viable option. For me, the fun part is seeing dim sum carts whizzed around a banquet room tempting  diners to flag them down. At THW, the menu has been stripped down to essential dishes.

Getting a table at the restaurant was an experience in itself. We arrived late around 12:00pm assuming that the wait would be 1 to 1.5 hours. The wait turned out to be 3 hours long. We gave our name and a phone number for the restaurant to reach us and went nearby to the Smith for a light brunch. After brunch, we ended up with three people for dim sum. Around 3pm, we received a text indicating that our table was ready and we needed to come back as soon as possible. Once we arrived at THW, it took another 15 minutes be seated. There were still people putting their names on the list and the wait was still three hours. We were told the best way to get a table was to have one sacrificial soul come when they open at 10am and put their name on the waiting list for the whole group to be able to eat around 12.

After we were seated, the waiter came promptly to take our order from the menu that doubled as a placemat. We then proceeded to order almost everything on it. The food came very quickly and we devoured them just as expeditiously. These are the items that we selected for our dim sum. 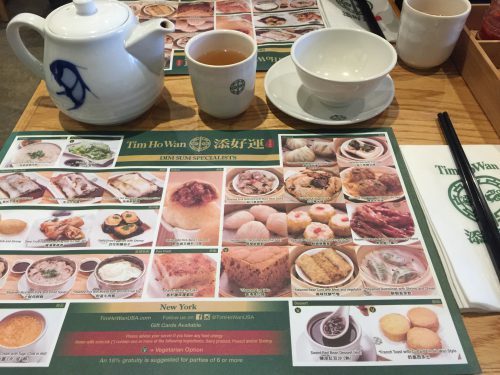 The first thing that came out was sweet osmanthus jelly with Goji berries and sweet pumpkin cream with sago served hot. Interestingly, the desserts came first before the savory dishes. The osmanthus jelly resembled a softer version of Jello and had a light sweet herbal taste. The overall effect was very refreshing. The sweet pumpkin cream was a pudding that was not overly sugary as well.

THW’s signature buns were heavenly as they were flaky on the outside and savory on the inside. The braised pork filling melted in my mouth. The bun crust was sweet, salty and crunchy at the same time. It was so good that we ordered another serving to go. Technically, we were not allowed to order takeout, but were told to order for the table and doggy bag it home. I would come back just for these buns. 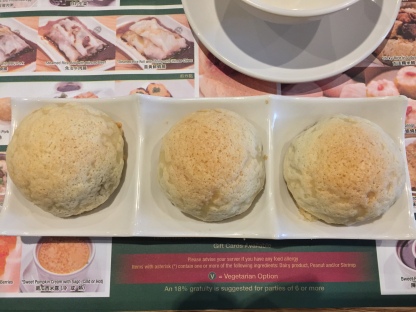 THW’s steamed pork spare ribs was a good rendition of the dim sum classic. Succulent morsel of spareribs, with bones, were coated in a fatty savory black bean sauce. It was not the easiest dish or the prettiest dish to eat with a group. However, who can say no to fatty ribs?

Siu mai is the mascot for any dim sum meal. The shrimp and pork dumpling wrapped in a yellow skin was an easily likeable dish for most dim sum newbies. THW was not cheap about how much filling goes into each dumpling. One thing I liked about these dumplings was that it was not greasy like the Chinatown version. I could have eaten a few more servings of this dish, if not for brunch earlier. 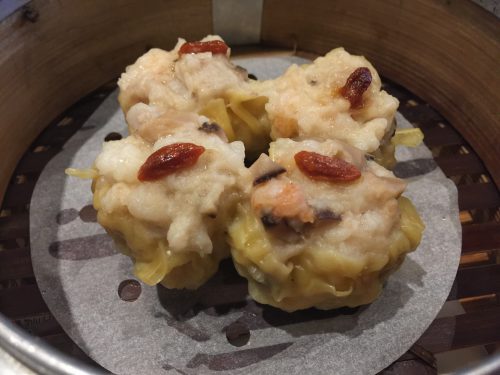 You can differentiate good dim sum parlors from bad ones by the thickness of the dumpling skins. The skin on these steamed shrimp and chives dumplings were very thin, but they were not delicate enough to break apart too easily. The filling peeped through the translucent steamed skin beautifully. The crunchy shrimp and light onion taste makes these dumplings so satisfactory.

Steamed shrimp dumplings were very similar to the shrimp and chive version and just as good.

A large sticky rice ball is filled with braised pork at the center and steamed in a lotus leaf. The sticky rice was moist and the braised pork adds the right amount of flavor and textural contrast. This is another classic dim sum dish that THW does well. 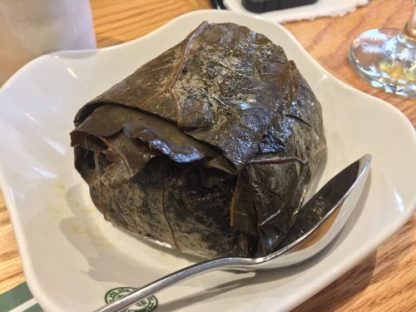 Chicken feet always scare people because, well, it’s chicken feet. I grew up eating chicken feet at dim sum restaurants and was stoked that THW had this on their menu. The chicken feet was one of the better rendition that I had as the abalone sauce was really tasty. The skin melted off the bone and the savory abalone sauce coats every piece of skin. This was so delicious and was not greasy at all.

The steamed egg cake resembled a sponge cake but with a heavier egg taste. The texture is very light, fluffy and not overly sweet like American desserts. This is a perfect cake to go with tea. 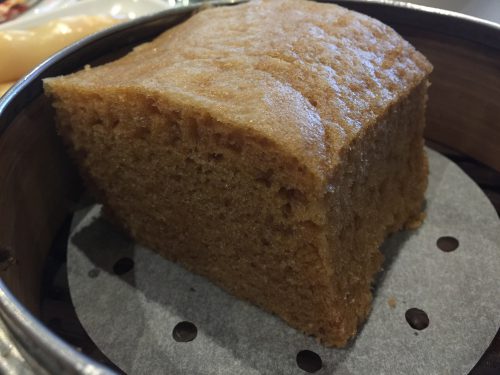 This was a simple vegetable spring roll dish that was prepared well. There wasn’t anything particularly special about this dish. This was an addition to the THW HK menu for the American location. 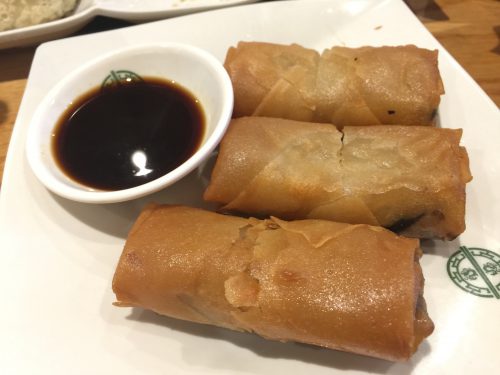 This is the Chinese version of lasagna. A thin layer of rice flour batter is steamed until it solidifies. Next, shrimp are added to the rolls and the rice rolls are drenched with soy sauce. This is another classic dim sum dish and is one of my favorite dish. 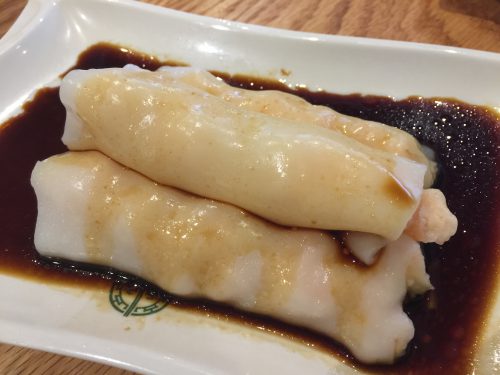 Overall, the US offshoot for THW was better than many of the Manhattan dim sum parlors that I have tried. It was obvious that the quality of the ingredients were much higher than their Chinatown competition and the slightly higher prices reflected that improvement. Prices were approximately $1-$2 more per dish than Chinatown. Even though I enjoyed my meal at THW, I would not want to wait for 3 hours again to eat here. This dim sum restaurant is worth at most a 1 hour wait for a repeat. For first time diners, this may be worth the long lines to try it once.