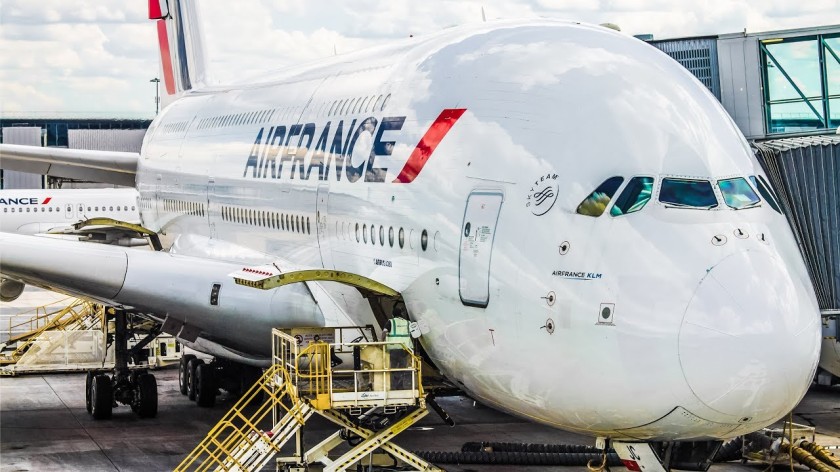 *I had written this post before Covid-19 upended the travel and airline industry. I hope we can go back to our wanderlust days safely soon. It is unclear how Air France’s offerings will be impacted by the pandemic.

On my recent flight from Paris to NY, I was able to try out Air France’s business class on an Airbus A380-800. This model will eventually be replaced by a newer and more efficient version later in 2020. I was very sick returning from a holiday in France, so a comfortable journey was a necessity. This was my experience on Air France in comparison with other business class flights that I have taken over the years.

Generally, AF’s Paris to NYC flight costs a few thousand dollars each way. Some discounted business class flight upgrades may be available on the day of departure at the check-in counter.

For a business class seat on a 7+ hour flight, I was disappointed to find out that it was not a fully lie flat bed even though it was advertised as like “lie flat” or as AF puts it, “angle flat”. The seat nearly reached 180 degrees; however, it was weirdly angled where I found myself sliding toward the footrest. This disrupted my much-needed rest since I had to re-position myself a few times during the flight. AF also did not provide sheets except for a cozy blanket so passengers might find the seat material a bit scratchy to sleep on. The configuration was 2-2-2- with no direct aisle access for the window seat, which had more storage along the side of the plane compared to the aisle seat. There was also a very small tray that came out of the armrest for a business class seat, which could be a problem if you needed to work. 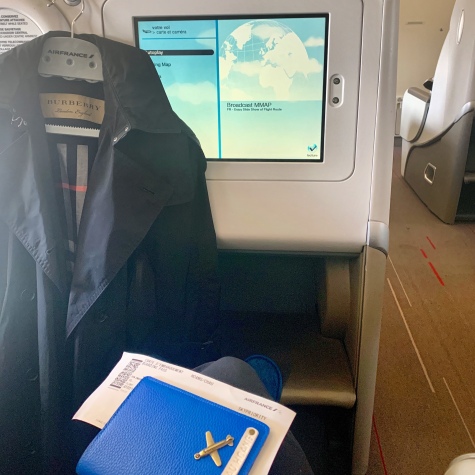 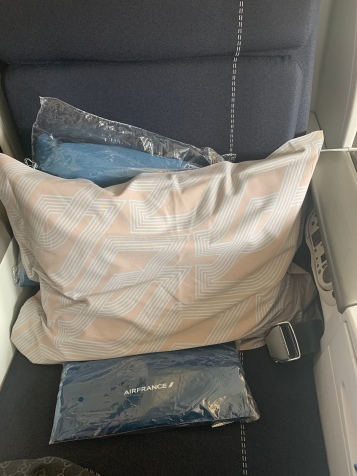 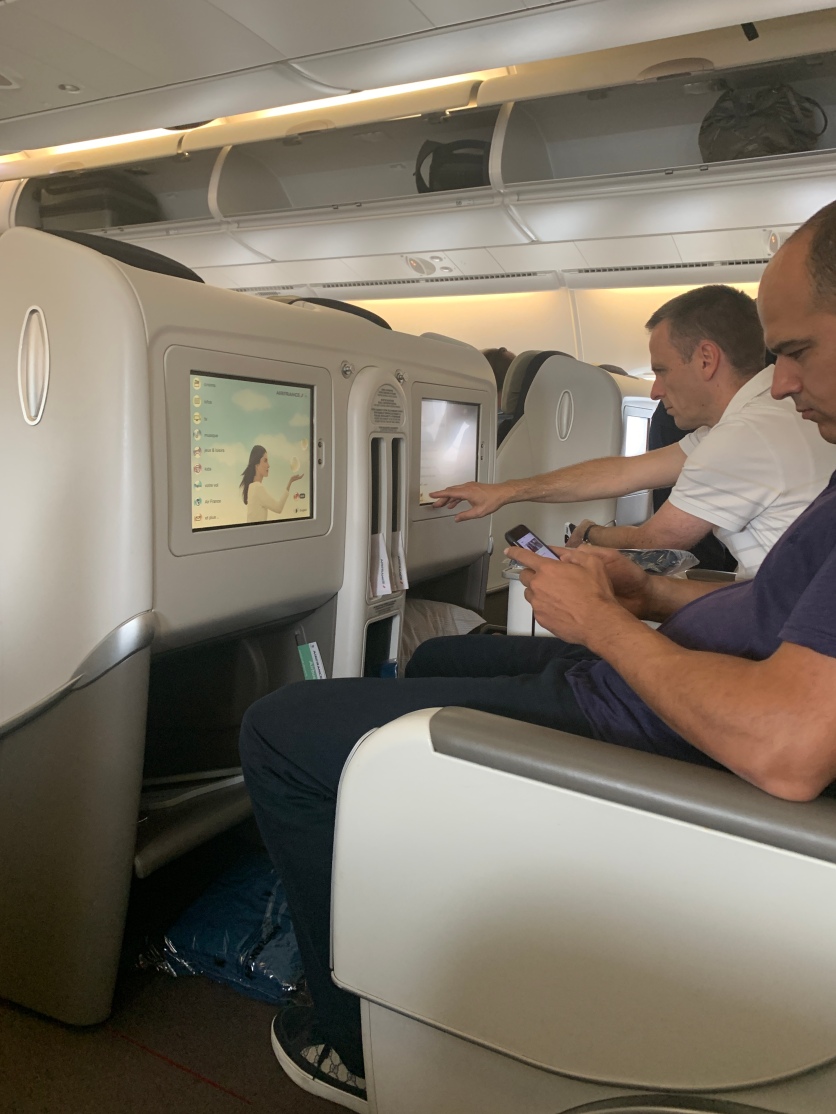 The business class ticket gave me Sky Priority security and boarding access. First class and business class board on the upper deck while other passengers use the lower deck. We had a small issue with boarding as the AF crew allowed business class passengers to board but didn’t allow people to enter the plane, creating a massive backup on the stairwell. It took 15 minutes for someone to let us onto the plane. 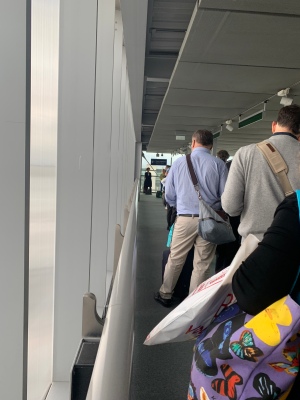 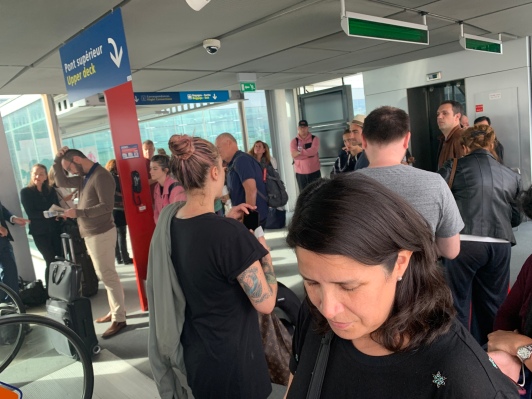 The AF lounge is very large; however, it surprisingly didn’t have the variety of food options as I had expected. I’ve been very spoiled by the Asian airline lounges where you want to go early and eat as much yummy food as possible. 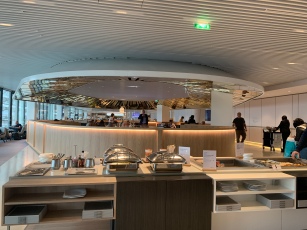 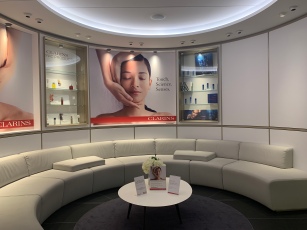 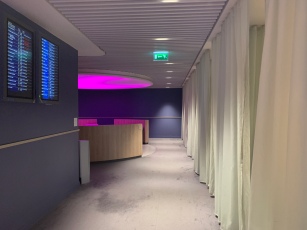 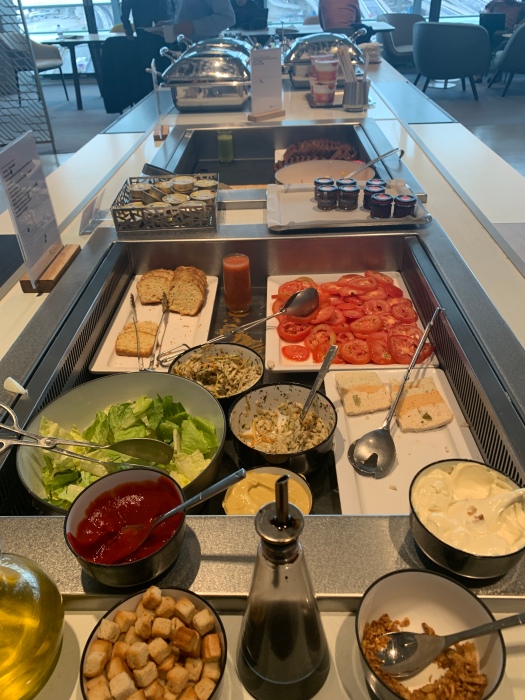 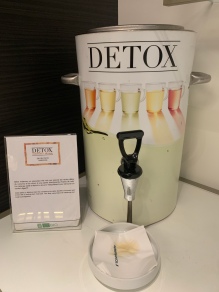 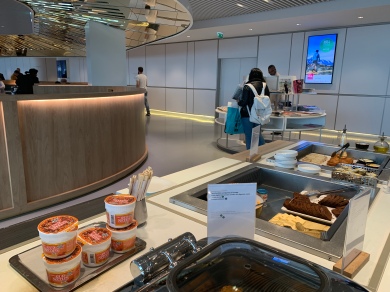 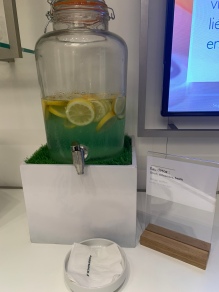 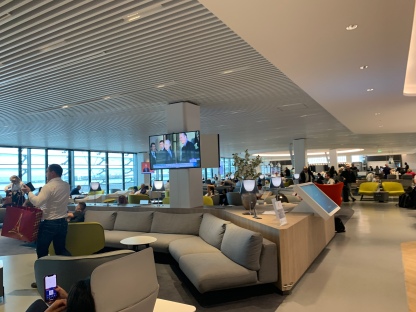 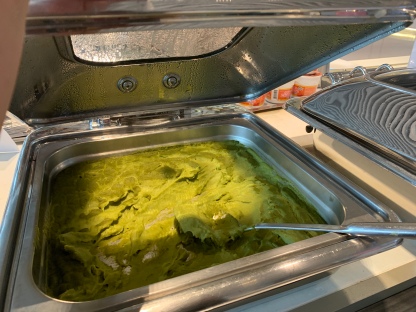 Once I was on the plane, the flight attendant gave me a labeled hanger for my coat. A standard business class amenity kit and noise cancelling headphones were offered. I liked the large eye mask that I received since it was bigger than my current version and lined with this ultra-soft material. Slippers and socks were also offered.

We were served two meals on the flight. The dinner menu offered an appetizer, a starter, main dish, cheese and desert course. There was also a very small “At Any Time” menu offering a few not so enticing items versus the large selection of tasty mini meals from Japan Airlines. As a foodie, I wasn’t even tempted enough to try out that menu. Additionally, the offerings appeared to be on the caloric side. AF does have an extensive wine menu that was pages long.

I chose the lighter dinner option with the zander(fish) and shellfish jus with peas and green asparagus, polenta with tarragon. It tasted good, but the fish was dry. My neighbor’s spring lamb stew with rosemary looked much more appealing and she seemed to enjoy it.

Before arrival, I was offered a small breakfast comprised of a lot of bread and yogurt. It tasted okay, although nothing I would write home about. I will also preface that I like to eat healthier with less carbs and sugar. The breakfast was all carbs and sugar, so others might like it more than I did. I could’ve used some fresh fruit to offset the heaviness of the meal.

I found the bathroom to be clean but not spotless. Clarins toiletries were offered, which was a nice touch. It was much better than what I experienced on AF’s economy flights.

The AF service was attentive as expected of business class. There wasn’t anything memorable about it other than they got the job done.

Overall: Average to Above Average

I’ve been spoiled on some really good business class flights with other airlines. This was a good transatlantic business class offering but was average compared to AF’s competitors. Nonetheless, I got my much-needed rest on the flight, so the flight served its purpose.

For related articles, visit the TRAVEL page or the World Travel Index.